Dutch Country General Store™ has announced plans to open a second location due to the company’s rapidly expanding retail efforts. CEO & Proprietor Levi Good says, “We are excited about the opportunity to come to Hannibal and partner with the community in an effort to further enhance the local economy, retail landscape, and beautiful historic downtown”.

Hannibal leaders came together to bring the store to Northeast Missouri. Recruitment efforts from entities including the City of Hannibal and Hannibal Regional Economic Development Council were instrumental in helping the Dutch Country General Store team to select Hannibal for its second location. Mayor James Hark shares:

This project is a great example of the importance of public/private partnerships and what can be accomplished when we work together. I would like to thank the Hannibal City Council, City Staff, City Attorney James Lemon, HREDC Special Counsel for Economic Development Tom Cunningham of Cunningham, Vogel and Rost and HREDC as well as its economic development partners for their support of this project.

City Manager Lisa Peck adds, “It has been a pleasure to work with the Dutch Country General Store team on this project. I am confident they will be a great corporate citizen in Hannibal for many years to come and I appreciate their investment in downtown Hannibal.”

Our team initially considered 20 communities across the Midwest for the expansion of Dutch Country General Store’s brick and mortar footprint. These communities needed to “check all the boxes” in regard to traffic flow, tourism, population density, etc. Over the course of several months, we narrowed our search and eventually visited 4 sites, Hannibal being one of them. We were incredibly impressed with the presentation from Hannibal leadership, as well as the warmth of the community. We believe that Dutch Country General Store will make a great long term addition to the retail landscape in the downtown.

Dutch Country Living™, parent company to a variety of companies including Dutch Country General Store™, Amish Made Poly™ and My Amish Friends™, has grown significantly over the last seven years when Good purchased the company from his then-employer. Inc. Magazine has recognized Good’s achievements by naming him among their annual Inc. 5000 list two years in a row, an accomplishment achieved by fewer than 20% of companies nationwide.

An investment of this magnitude in downtown Hannibal is a real testament to the economic vitality of that district and will spur additional investment. We have been sharing this news with other prospects and they are taking notice of the significant opportunities Hannibal has to offer.

Dutch Country General Store currently sees hundreds of visitors each day at its flagship massive brick and mortar store in Davis County, Iowa. A popular tourist stop just north of the Missouri border, shoppers delight at the unique, nostalgic, and often handmade product lines which include old-fashioned toys, traditional Amish wood furniture, bulk foods, baked items, candy, heirloom quilts, candles, jar goods, and more. The store launched an online shopping experience in late 2017 and continues to add new products regularly with the goal of allowing visitors to enjoy the quality products and experience of shopping at the store from home or anywhere. 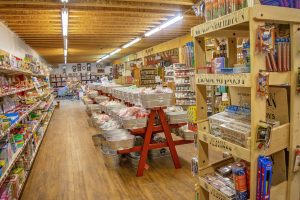